The purest idolatry of all?

“Ye shall make you no idols nor graven image, neither rear you up a standing image, neither shall ye set up any image of stone in your land, to bow down unto it: for I am the LORD your God.”  (Lev.26.1)

Islam is famed as a strictly iconoclastic faith, in which idols or associations of created beings or objects with the ever Blessed Creator are shunned with righteous hatred. In many ways, Islam may be seen as a Divine judgement on apostate icon-worshipping Christians, who having slipped back into their pagan ways had provoked God to anger. No better example of this may be found than in fall of (now ) in 1453 after a series of fierce and violent internal struggles over icon worship in the city finally gave way to unopposed idolatry.

Yet ironically, for all their stringent rejection of the human and animal form Muslims are themselves given over to an ancient form of pagan worship.

It is one they most horribly and improperly attribute to Abraham, namely the worship of the Ka'bah five times a day. Islam is at essence submission to the black rock, in devoted prayer and ritual, and ultimately the once a lifetime duty of circling the rock in pilgrimage, often still resulting in the deeply pagan practice of kissing the old idol.

Abraham turned his back on idols and the moon god Sîn as he left of the Chaldees, and renounced them, Muslims return five times a day to one of the oldest and most notorious. A practice the true prophets strongly rebuke and condemn.

An image of the cresecent moon god Sîn/Nanna of Ur, and his high priest, c.2100 BC, taken from Wiki.

The Ka'bah at describes the shape of the black stone structure on a marble base which stands in the centre court of the Great Mosque, Masjidul Haram, at the centre of . It stands about 50 feet high by about 35 feet wide. Set into the eastern corner is the sacred stone. This Ka'bah is a cubed shaped temple rebuilt by Abraham and his son Ishmael. Reverently draped in black cloth throughout the year, it beckons to every Muslim of the world to come to its sacred ground.

Woe unto him that saith to the wood, Awake; to the dumb stone, Arise, it shall teach! Behold, it is laid over with gold and silver, and there is no breath at all in the midst of it. (Hab 2:19)

'In their visionary dreams shall they be impious and superstitious, lying in all their actions, and worshipping a stone.'  (the uninspired and apocryphal work of Enoch 97.8) 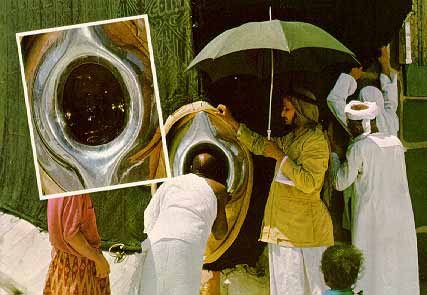 Similarly, deities of other cultures are well known to have been associated with stones include Aphrodite at Paphos, Cybele at Pessinus and later , Astarte at and the famous Artemis/Diana of . The latter's most ancient sculpture was, it is said, carved from a black meteorite. The link to Diana and Aphrodite is far from coincidental.

“And when the townclerk had appeased the people, he said, Ye men of Ephesus, what man is there that knoweth not how that the city of the Ephesians is a worshipper of the great goddess Diana, and of the image which fell down from Jupiter?” (Acts 19.35)

According to Bukhari, even loyal ‘Umar blushed at the eagerness of his prophet to engage in pagan worship.

"Narrated 'Abis bin Rabia:
'Umar came near the Black Stone and kissed it and said "No doubt, I know that you are a stone and can neither benefit anyone nor harm anyone. Had I not seen Allah's Apostle kissing you I would not have kissed you."(Vol  2, Bk 26, No. 667)

All idolators, even Hindus with their manifold deities, claim that the image or statue they prostrate or pray to is just an aid to worship of the substantial reality. The scriptures categorically reject this excuse. Any bowing down to a stone or image is spiritual adultery, blinds the eyes and hardens the heart.

This is an extremely serious breach of God’s second commandment, weak Muslim excuses nothwithstanding, it is something God hates intensely and will earn eternal wrath unless repented of.

Confounded be all they that serve graven images, that boast themselves of idols: worship him, all ye gods.     Ps 97.7
He feedeth on ashes: a deceived heart hath turned him aside, that he cannot deliver his soul, nor say, Is there not a lie in my right hand?      Isa 44.20
'...idolatry: for which things’ sake the wrath of God cometh on the children of disobedience:'   Col.   3.5b-6